The Real Stories of Athletes Always Challenging Themselves

Inspiring others is the source of my energy 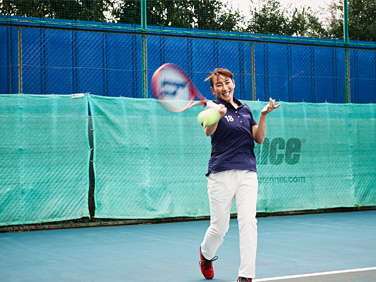 At the fundamental level, sport provides an entertaining way for people to compete against each other in physical one-upmanship. But sport can also have a deeper impact, providing opportunities for personal growth and social transformation. Athletes have more than just fun on their minds as they entertain spectators with their physical feats; they also have broader goals and visions they hope to achieve through sport.Ai Sugiyama, once a top professional tennis player, is now focused on improving the lives of young people through tennis. She tackles various challenges including the start-up of a new tournament for junior players because "I went through tough times myself", and she believes in the "power of sports". 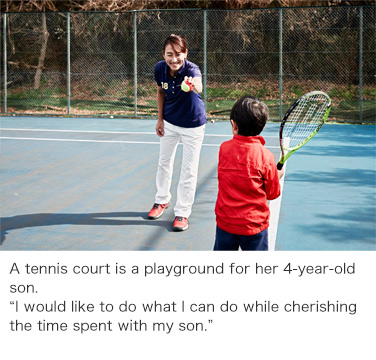 Her cheerful voice echoes at Palm International Sports Club in Chigasaki City, Kanagawa. Ai Sugiyama, serving as the representative of the Club, coaches her beloved son. She currently works as a TV commentator and also coaches youngsters at the Club. When she holds a racket and runs on a court, it reminds us of her time as a professional player, while she comments, "If I play with Naomi Osaka, I wonʼt be able to even win a game. Maybe I can win a point if Iʼm lucky."

As a player, Sugiyama competed in 62 consecutive Grand Slam tournaments. Her carefree smile and enthusiasm for sport remains today, and Sugiyama is passionate about her role as an Ambassador for Laureus, the global organisation that uses the power of sport to transform the lives of children and young people.

"I believe that sports can create a better world, and is not just for winning and losing or having fun. It helped me to grow as a person by playing as a professional and traveling around the world. Therefore, I felt very privileged when I was contacted by Laureus, since sports legends and top athletes who not only achieved great accomplishments but also are wonderful people have already been active in this organization. At the Rugby World Cup last year, I participated in a rugby lesson hosted by Laureus and Special Olympics Nippon Tokyo for children with intellectual disabilities. I can see a lot of potential in these children from their sparkling eyes. I personally learned many things and spent valuable time."

Charitable activity was a part of Sugiyama's life throughout her professional career, as she often gave back financially to organizations close to her heart. As a player, she would donate 10,000 yen to the Japan Cancer Society for each win during a tour as well as donation of all the prize money she earned to twin sister players who suffered from severe illnesses. Most recently, she participated in a charity event to support the victims of the forest fires in Australia.

" Traditionally, itʼs been an implicit practice in the tennis world to give back to society when we become top players and can afford it. I had thought it was a wonderful thing to do ever since I was still new as a professional player, and naturally came to think that I would like to do whatever I can. For tennis, we constantly tour all over the world, and have opportunities to learn cultures of various countries different from Japan. In the beginning, I hesitated and felt homesick when my understandings were different from othersʼ. But I cannot compete without accepting differences. It was such a struggle until I eventually accepted that this world is where I live and play matches." 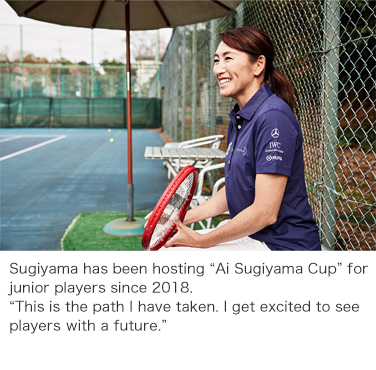 "Once stepping off the court, a rival is a "peer"

After all, she had peers. She does not go on a world tour by herself. Players she met every week at tournaments were also like peers in one team.

"A rival when I play matches becomes a peer once stepping off the court. Players come from many countries and are always willing to do charity events if a disaster occurs somewhere in the world, as exemplified by the Hanshin Great Earthquake in 1995 and Great East Japan Earthquake in 2011. I believe that strong awareness of our ability to contribute to society is one of the things that makes the tennis world attractive."

Sugiyama was known as a wonderful singles player as well as doubles player during her career days. She won three Grand Slam titles and also held the worldʼs #1 ranking.

"Singles is tough because I need to fight alone. For doubles, I had strong awareness to enjoy playing tennis. I would choose my partner because I liked the personʼs character not because I can win matches. I can say my true feelings and pay respect to my partner because we get along well and like each other. I can enjoy the process of team building with such a partner. I was able to tell what my partner was thinking just by looking at facial expressions; therefore, I might have been able to achieve good results."

Sugiyama is now taking on new challenge. She has been holding "Ai Sugiyama Cup", the official junior tournament accredited by the International Tennis Federation in her hometown Chigasaki since 2018. An opportunity for junior players was created so that they can spread their wings around the world.

"Points need to be earned by competing in accredited tournaments to enter the worldwide rankings. However, it is not easy to enter tournaments held in various places in the world, which also requires a lot of money. It was also difficult for me, so I decided to hold a tournament to allow points to be earned in Japan. Players I teach at the Palm International Sports Club also enter this tournament, and there is no doubt that young players have a lot of potential. I get more excited than the players. I feel so happy to be able to dream with them. It is not a large tournament but I hope it grows in its own way."

Hope to give energy to other people – she says this thinking has never changed since her career days. She devoted herself to tennis since she became a professional player at age 17, remembering that "spectators pay to come to watch the matches".

"I slipped into a slump when I was 25, and thought I could never get out of it. This tough time lasted for several years, and I felt like quitting tennis during this time. I tried facing myself and wondered why the god of tennis gave me these trials. I did everything I could such as a breathing method in addition to training, sleeping and eating programs, as well as learning from my mistakes. After all of that, I still realized that I would like to inspire people. Even though I wasn't winning, I may be able to cheer someone up if I continued to grow little by little. This way of thinking unloaded a heavy burden off me, and I gradually came to achieve better results."

"Seeing people smiling while watching me play tennis makes me happy. Efforts do not always make you a professional, which is true not only for sports including tennis but also for academics and arts. However, I believe skills are not the most important thing. Time to be devoted to one thing, or time to accumulate experiences for a person to be his/her true self is important."

She loved tennis which allowed her to grow. That is the reason why she wants to return the favor. It may not be in such a far future when we can see smiles of the players nurtured by Sugiyama on a world stage.

Born in 1975 in Kanagawa Prefecture. Turned professional at age 17. Won six singles and 38 doubles titles before retiring in 2009. Highest world ranking is #8 for singles and #1 for doubles. First Japanese player to break into the top ten in both singles and doubles at the same time. Working as a TV commentator after retirement, while instructing young players at Palm International Sports Club where she serves as a representative. Appointed as a Laureus ambassador in 2018.