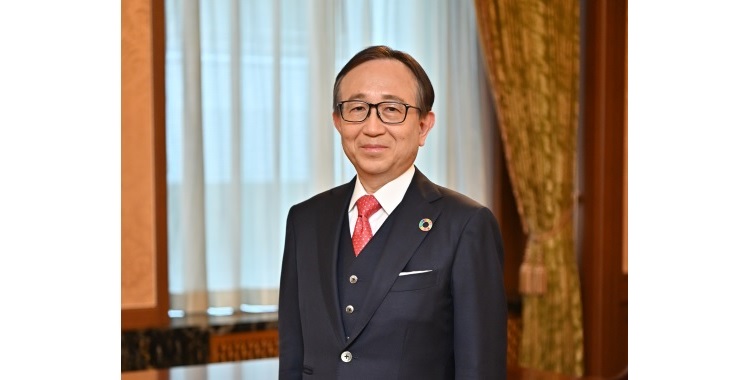 First of all, I would like to begin by expressing our deep gratitude for your ongoing support of our operations.

Performance Results for the First Half of Fiscal 2019

During the first half of the fiscal year ending March 31, 2020, gross profits grew 90.7 billion yen year on year to 1,973.3 billion yen mainly due to an increase in net profits associated with the global markets business. At the same time, general and administrative expenses rose 27.5 billion yen despite tight grip on costs in domestic operations due primarily to growing expenses in overseas operations and higher regulatory costs. Nevertheless, net operating profits totaled 631.3 billion yen, up 63.1 billion yen year on year. This marks the first time in the last four fiscal years that we have succeeded in recording growth in net operating profits year on year, thanks to our steadfast efforts to reverse an ongoing downward trend.

However, first half profits attributable to owners of the parent amounted to 609.9 billion yen, down 40.8 billion year on year due to such factors as the absence of the reversal of allowance for credit losses that was posted in first half of fiscal 2018. This figure represents 67.8% of our full-year target for profits attributable to owners of parent of 900.0 billion yen, which was announced at the beginning of the fiscal year.

MUFG has positioned the further enhancement of shareholder returns as a key management issue. Focusing on dividends as our basic shareholder return, we are thus practicing a policy of enhancing shareholder returns while giving due consideration to the maintenance of solid equity capital and strategic investments for sustainable growth in order to strike an optimal balance.

We also aim to raise the dividend payout ratio up to 40% by fiscal 2023. For fiscal 2019, interim dividend is 12.5 yen per share in line with the dividend forecast announced at the beginning of the fiscal year and the forecast for annual dividends remained unchanged at 25 yen per share. Furthermore, we will repurchase our shares of 50 billion yen and cancel all repurchased shares. Along with securing financial soundness, we remain committed to executing tight capital management.

Currently, we are implementing structural reforms under the MUFG Re-Imagining Strategy, with the aim of overcoming radical changes in the environment and getting the Company back on the path of sustainable growth.

As part of its digitalization strategy, MUFG stepped up a strategic partnership with the U.S.-based Akamai Technologies, Inc., establishing Global Open Network Japan. Efforts are currently under way to provide a high-speed, high-capacity payment network service in the first half of 2020. In line with our sales channel strategy, we have incrementally expanded the scope of procedures that can be completed via smartphone apps in an effort to enhance customer convenience through the use of digital technologies. Moreover, in September 2019 MUFG Bank initiated a mutual arrangement with Sumitomo Mitsui Banking Corporation wherein the two banks will allow each other’s account holders to withdraw cash from their off-branch ATMs. Thanks to this move, MUFG’s customers are now able to use a significantly greater number of ATMs with flat fees.

With regard to strategic investment, we have made steady progress in initiatives aimed at seizing opportunities arising from market growth, for example, making the Indonesia-based Bank Danamon a consolidated subsidiary and completing the acquisition of shares in an Australia-based major asset management company. At the same time, we are working to maximize synergies between Group companies.

Facing a rapidly evolving environment, we are hard at work to achieve the re-imagining of MUFG. Even though the operating environment may continue to be harsh, we are determined to deliver products and services that genuinely satisfy customer needs and expectations under the slogan of “Let’s Build New Trust.” With the aim of winning the confidence and trust of customers all around the globe, we will remain a forerunner in terms of innovation and thereby enhance our corporate value. Looking ahead, we ask for your continued support of our endeavors.